Since forming in 1990, Nashville legends The Floating Men have become one of the most influential indie acts in the Eastern US, releasing ten critically-acclaimed studio albums and a bevy of officially-authorized bootlegs. Their songs are covered by young performers all over the country, their lyrics are discussed in college classrooms, and they have inspired innumerable songwriters, musicians, and poets. Supported by a ravenously loyal cult of road-tripping followers (self-dubbed The Floatilla), The Floating Men continued to stretch musical boundaries on their 2002 CD release, A Magnificent Man, and on their 2004 release The Haunting, The Floatilla, as their fans are known, became "Executive Producers" of individual tracks by paying as much as $1,000 per team to watch The Floating Men record a batch of character-rich songs. “The Sighing Hours Act I: No Clocks, No Calendars” (2009) is the fifth consecutive studio album fully funded by their enthusiastic fan base. Act II "The Sighing Hours: Swimming with Gods" was released later in Summer 2009.

Since 2001, Jeff and Scot have been joined on stage and in the studio by Steve Ebe on drums, David Steele and Chris Cottros on guitars, Jody Nardone on keyboards, and background vocalists Andra Moran and Eva Hunter. The band does not currently have any live performances planned.

“As a multi-generational native of rural South Carolina, I grew up immersed in the natural and cultural history of my beloved home state and have found the two to be virtually inseparable. Some of my earliest memories are of my father, a gifted and passionate naturalist, conservationist and educator, holding my siblings and me rapt with tales of the great southern outdoors and the strange, ghostly history of family and our culture.

The opera, No Clocks, No Calendars, is part sex farce, part love story, and part supernatural chiller, set on a sea island off the coast of South Carolina, where a liberated, enlightened hippie enclave interacts warmly with the local culture, dominated by the Afro-Caribbean descendants of slaves.

The story centers on a handful of townies from Memorial Day weekend to Labor Day, the peak of the tourist season. It follows their loves, heartbreaks and personal struggles and ultimately, tragedy. It celebrates heritage and diversity, champions a strong attitude in favor of sexual liberties and explores the dark consequences when basic human rights are withheld.

As for the characters themselves, the Sand Man is based on a composite of the Hag and the Plat-eye, two of Gullah folklore's most evil spirits. The character of Dr. Love is loosely based on notorious real-life root doctors and conjurers such as Dr. Buzzard, a fixture in the 20th century Gullah community. The remaining characters are simply young people on the very top of their lives, wanting what the young want: love, acceptance and fun.

I have poured my passions into the nuances and details of Gullah traditions as well as the high-octane exploits of the late 60s/early 70s hippie underground amid the marshes, beaches, pine savannas and mosquitoes of the Low Country to form a complex stew of delightfully mingled flavors and overlapping ingredients. It was in this that I found the enduring truths of human dignity, respect for heritage and an abiding sense of place that built”

No Clocks, No Calendars. Thank you for listening.

“The burden of the South’s tragically beautiful history is reflected in Jeff Holmes’ lyrics, where Holmes brilliantly, playfully, and reverently portrays the absurdities and contrasts of the South. From plantations backed up against the parking lot of the Paradise disco which is “choking on vines” to the town drunks and the voodoo women who prowl the South, as well as the ornate chandeliers hanging in abandoned mansions, Holmes’ lyrics and, seemingly his heart, are enrapt by the South much like kudzu imprisons southern roadways. Paying homage to Faulkner with “A Rose for Emily” and other lyrics, Holmes also echoes Tennessee Williams in that he is always championing the disenfranchised and those on the fringes with his lyrical parade of Southern gothic and grotesque characters. Finally, in the steps of the mighty southern word slingers before him, Holmes humorously gives life to the poor, white trash of the South (See “Scrawny Little Outlaw” and others); however, these characters serve in juxtaposition to other characters like the uppity church ladies and the underhanded pillar of the church. These characters are poor, trashy, and often a little more than left of center, but Holmes’ characterization of these folks is almost forgiving in that these people, regardless of the scorn they receive, wake everyday with the knowledge of who they are and never apologize for it. Jeff Holmes, through his reverence to words and his profound love of the South, inspired me to teach English, and he taught me how to be proud of being southern.” 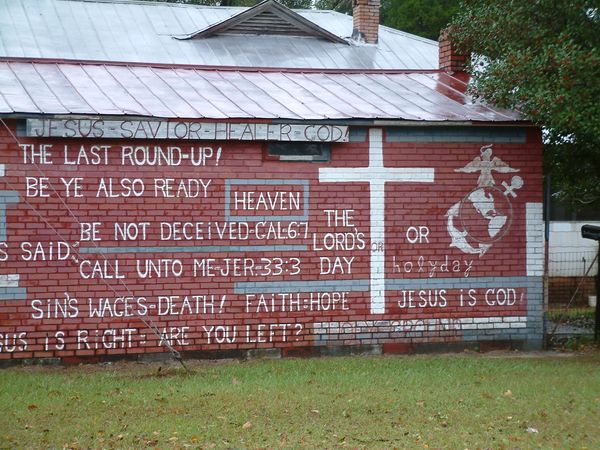